While covering a story for American Towman magazine last week, I felt it necessary to share what I experienced. The mission of Spirit Ride is to raise public awareness of the “move-over” law as it journeys in Honor of Fallen First Responders. Since the Ride began last year, Spirit Ride has generated media coverage across America through TV, radio, newspaper, internet and social media carrying its message to millions who get behind the wheel.

According to the National Safety Commission, 71% of Americans have not heard of the “Move-Over” Law. I live in Georgia, and we have the Move-Over Law. It’s evident that many Georgia drivers don’t obey this law. Whenever you see flashing lights, from any emergency vehicle, please slow down and move over one lane.

The Spirit Ride draws attention to the dangers faced on the highway on a daily basis by men and women of the police, fire, emergency, medical and towing services. Hundreds of casualties a year are the result of cars and trucks passing too fast and too close, coming within inches from where work is being done on the shoulders or closed-off lanes. Highway workers, such as the DOT, Utility and sanitation workers are also being struck. On an average, 100 first responders are killed every year while responding to emergencies. 60% of those fatalities are tow operators. Losing even one person is unacceptable. However, we can change this if more people are made aware.

During the Spirit Ride ceremony, the casket is placed right up front. It’s a ceremonial casket with picturesque art work, depicting a state trooper standing near a wrecker during a recovery with a truck bearing down his back. On the lid of the casket there’s a scene that shows representatives of police, fire, EMS, and towers standing together before their emergency service vehicles. The solemnness of the ceremony really pulls at your heart strings while you solemnly bow your head in reflection.

Along with his wife, Llce, Mike Corbin, the singer and lyrist takes a ceremonial casket and a large RV all across the country. During each ceremony, Mike will sing three songs. His first song relates a story of a dad leaving his home one day, kissing his wife and children goodbye while reiterating how much fun they will have at their upcoming family’s weekend activities. Unfortunately, Dad never returns. He was hit and killed by a passing car and never made it back home. Sadly, it will take a collective effort for this country to correct the driving habits of this nation. Most drivers are on a time crunch, in a hurry and usually impatient when it comes to getting where they need to be.

After the 25-minute, Spirit Ride ceremony was completed, the Police Chief spoke, Captain of the Fire Department, and then a mom of a tow truck driver whose son didn’t return home to his wife and new baby. While Mike Corbin sang, I sat there with tears in my eyes. Knowing how fast some cars come flying down the road, some drunk and some distracted by a cell phone or conversation with a passenger in the vehicle, I was emotionally impacted with Mike’s lyrics. If you don’t do anything else, please,  let people know that they need to slow down and move over one lane so people can live. It’s the law. Help me get more people to attend a Spirit Ride ceremony when it is in
your town.

The first ceremony was held on June 1, 2017 in Havenhill, Massachusetts. In the first year alone, 140 cities, large and small, all across America were visited. By the time the Spirit Ride casket has crisscrossed the nation, it will have visited approximately 300+ cities with an escort of some 10,000 tow trucks. To learn more about the Spirit Ride or to find out when it will be done in your local area, go to
www.ATspiritride.com.

See you next time. 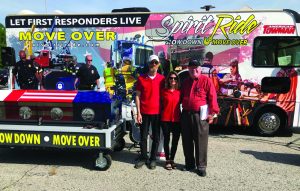 Correspondence regarding this article should go to:

D. J. Harrington is an author, journalist, seminar leader, international trainer, and marketing consultant. He works primarily with customer service personnel, and his clients include such world-class companies as General Motors, DuPont, Caterpillar, and Damon Corporation. He may be reached at 800-352-5252. E-mail: dj@djsays.com. 52 weeks a year, we are as close as your telephone.