Looking back is always easier than looking forward. And last year was a good year for autocatalyst recycling. And for 2019 the outlook remains positive. 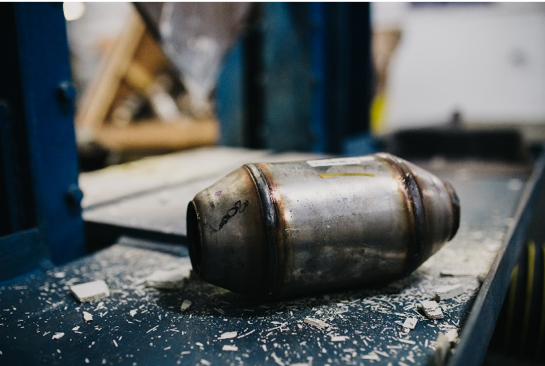 The strong demand for autocatalyst, increased vehicle recycling, and a short supply continues to push the Palladium price higher. Lower demand from the decrease of consumption of diesel vehicles in Europe combined with an increase of secondary supply from recycling continues to hold the Platinum price down. Stricter emission standards will increase Rhodium loadings, but that metal will still be in surplus.

The demand for new automobile catalyst climbed to record levels last year amidst a shortage of palladium (Pd), a surplus of platinum (Pt), and an increasing supply of rhodium (Rh). You can see from Figure 1 that palladium makes up most of the precious metals contained in autocatalyst or catalytic converters.

This is good news for palladium since palladium loadings have been increasing, mostly in the US market, in autocatalyst since the 1990s. At that time the palladium technology was less advanced and the fuels less clean, which means more palladium was added than platinum removed. At the same time, palladium was historically less than half the price of platinum.

Johnson Matthey in its PGM Market Report dated February 13, 2019, states that the secondary supply of palladium grew by 10 percent in 2018, after having a 20 percent gain in 2017. This is due to the increase in vehicle recycling once the scrap steel price bounced back from its lows during 2015 – 2016.

And considering “dieselgate,” Germany’s car emissions fraud scandal, there have been stricter vehicle testing procedures and tighter emission limits on heavy duty vehicles. This contributes to higher demand for autocatalyst and use of Platinum Group Metals (PGMs), namely, Pt, Pd, and Rh.

Even with the decreased use of platinum in three-way catalyst over the past 20 years, and the reduction of diesel catalyst production which uses more platinum, a small rise in increased demand for platinum will come from fuel cell technology in automotive applications and stationary power generation over the next several years. See Figure 2.

As emission standards tighten in most countries, rhodium loadings will also increase. Still this metal is expected to continue to be in surplus.

Recently, I asked Philip Newman, the Director of Metals Focus (@metalsfocus), a London-based independent precious metals consultancy group to comment on the outlook for platinum and palladium in 2019. Here is what Philip had to say.

Platinum has fallen to a record discount to gold of $526. That said, Metals Focus still expects platinum prices to eventually firm this year, especially towards end-2019. However, this is premised on our view of a stronger gold price. In other words, platinum will continue to face headwinds of unsupportive supply and demand.

In trying to gauge professional investor sentiment in recent weeks, the absence of up-to-date CFTC data has led us to review Nymex open interest. Having fallen for much of January, open interest has since risen through to mid-February. In our view, subdued weak institutional sentiment towards platinum indicates that the rise in open interest represents an increase in gross short positions.

Palladium has continued to strengthen this year, achieving a new record high of $1,439 on January 17. Key to this is the ongoing physical deficit in the palladium market, which this year is expected by Metals Focus to reach 1Moz.

Looking ahead, we believe palladium prices will continue rise this year. Even so, palladium’s record high prices increase the risk of near-term profit taking, although any downturn in the palladium price should be short-lived.

In summary, 2018 was a great year for both vehicle and autocatalyst recycling. At this time, 2019 looks to be more of the same. This is why we, at United Catalyst Corporation, believe that recyclers can get the most from their converters with the scientific process of selling converters on assay. For questions about selling converters on assay or copies of this article or previous articles in this series, email me or go to unitedcatalystcorporation.com.

Becky Berube serves the recycling community as President of United Catalyst Corporation, Co-Chair of the Automotive Recycling Association’s Events Advisory Committee, and is an ExCom Board Member of the International Precious Metals Institute. She can be reached at 864-834-2003 or by email at berube@unitedcatalystcorporation.com.