For nearly thirty years the automotive industry has been talking about hybrid electric vehicles and fuel cells without producing a very large market to date. Emission standards across the globe are becoming increasingly stricter. What does this mean for converter, hybrid battery, and fuel cell recycling? 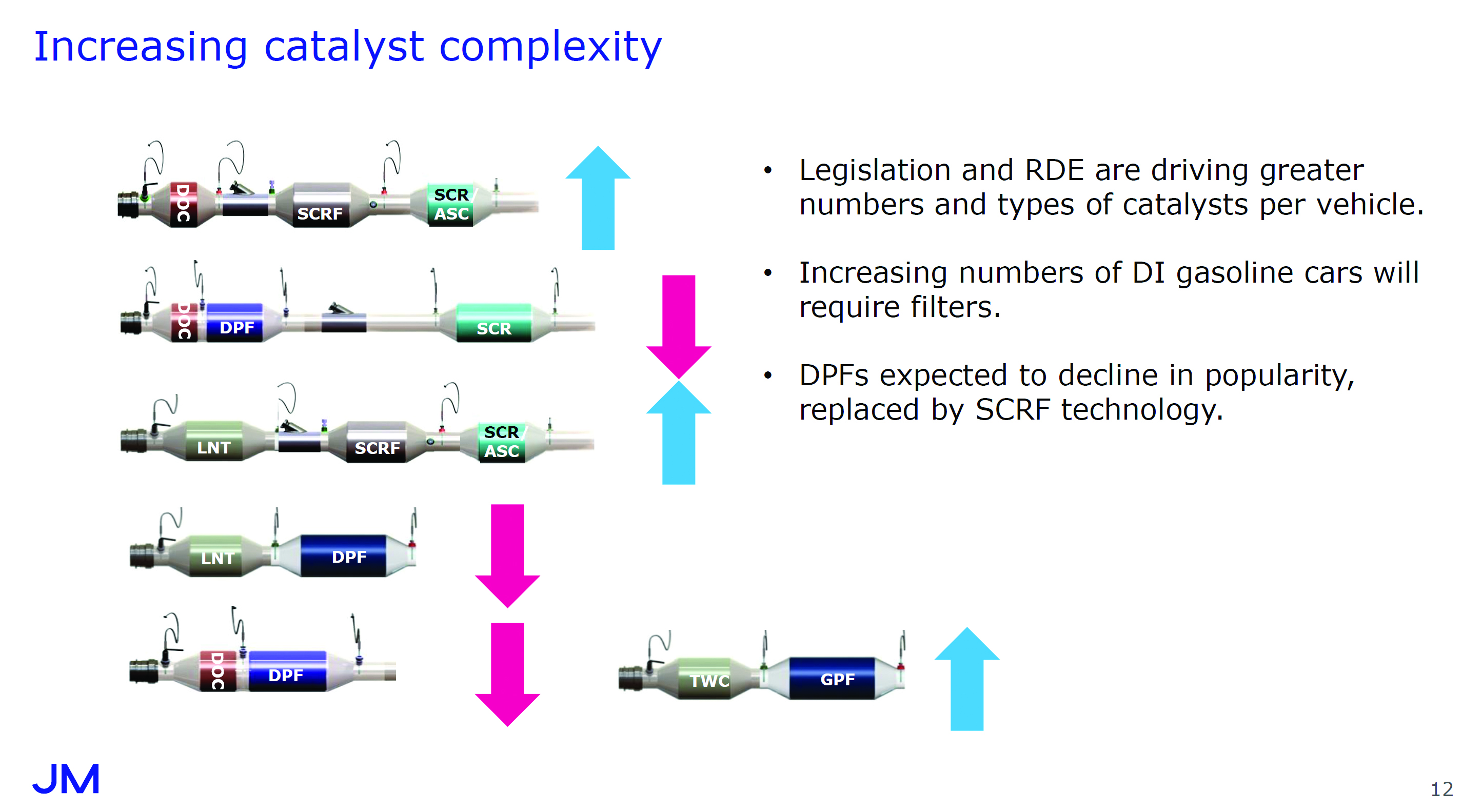 Recyclers are already becoming aware of the complexity of the large diesel systems that look like rockets where the diesel oxidation catalyst (DOC) has a typical amount of platinum and palladium (Pt/Pd)  and no rhodium (Rh) but the diesel particulate filter (DPF) contains only a small amount of Pt/Pd. The diesel system also contains  a selective catalytic reduction (SCR) catalyst which is mostly free of precious metals and a lean nox  trap (LNT) which also contains very little precious metals. These systems require separation for recycling and have higher recycling times and costs when containing silicon carbide (SiC).

Recyclers can expect more complex exhaust systems on both gasoline and diesel fueled vehicles. Overall, this trend implies more demand and use of precious metals but also more knowledge for proper recycling through an expert processor on a recovery basis, or assay, to get full value.

What will the alternative powertrains mean for recycling and the demand for platinum group metals (PGMs)?

Hybrid Electric Vehicles (HEV)
Johnson Matthey predicts that the longer battery range and the possibility of “cold starts” at high speeds could mean up to fifteen percent higher PGM loadings in the catalyst. This market is expected to grow from 2 million to nearly 20 million by 2025 including 48V electric system, mild hybrid electric vehicles (MHEV).

The result will be that these catalytic converters will contain higher loading of PGMs and therfore be more valuable.

Again, the mixed chemistry implies various handling techniques and recycling methods. In terms of value from PGMs, there is none. The fully electric vehicle has no impact on PGMs because without an internal combustion engine (ICE) the vehicle contains no catalytic converter.

The Move Toward a Hydrogen-Oriented Economy
In the next twenty years you can expect to see an infrastructure that fully supports hydrogen gas production, storage, transportation and consumption in power generation, transportation, industrial energy and building heat and power. In these days, the future is merging with the present and the supply chain is developing rapidly. By 2040, you should expect a competitively priced fuel cell vehicle.

The Great Hope for Platinum (Pt): Fuel Cell Vehicles
The use of Pt in auto catalyst has been on the decline for the past ten years. The Pt market is in surplus and the demand is low, hence the lower price. Today we see recoveries of Pd in scrap catalytic converters that are three to four times the amount of Pt per converter.

If the experts are right about the move from a fossil fuel-based economy to a hydogen-oriented economy, they predict that alternative powertrains and stationary power generators may be the last great hope for Pt demand and use. Platinum (Pt) is the standard metal used in fuel cell technology because it can convert hydrogen into protons and electrons and it can break oxygen bonds and eventually form water.

In conclusion, some experts say that the combination of hydrogen fuel cell hybrid, battery electric, and hybrid electric vehicle market share could go from 1 million to 50 million vehicles sold in the next twenty years. If this happens, watch for the increase of demand for Pt and get ready to start recycling more converters, hybrid batteries, and fuel cells.

Becky Berube serves the recycling community as President of United Catalyst Corporation, Co-Chair of the Automotive Recycling Association’s Events Advisory Committee, and is an ExCom Board Member of the International Precious Metals Institute. She can be reached at 864-834-2003 or by email at berube@unitedcatalystcorporation.com.